This particular week students read the story Jack and Rick. A charming story about two lovable characters, Jack, a rabbit and Rick, a bear who find themselves on opposite sides of a river. The pair have to problem solve to get on the same side of the river, so they can play together. In math students have been working on subtraction with an emphasis on story problems. For my cross-curricular project I had students work in groups to create their own taking away story problem. I thought using PowerPoint would be the perfect tool for this project, because students can deepen their understanding of subtraction by using animation to demonstrate taking away.

Get your Kicks with KidPix

I showed my students a sample story problem slide in PowerPoint that I created. The students liked the surprise element of animation! I asked them what they thought of the drab, white background. The general consensus was that it was a bit boring! That’s when I told them that we would draw our own background in KidPix! That got them really excited!

We shared the pen for the Epson Brightlink Projector. Each student had the opportunity to add to the picture. I loved how their final background turned out!

The next day, I heterogeneously grouped students in groups of 4. I assigned a group leader to each group. I provided them with a worksheet with sentence frames. Students had to discuss their ideas, and compromise on what they wanted to write down. The group leader completed the draft with input from their group members. This eliminated the students arguing over who was going to write. After that I helped students type their stories into PowerPoint. 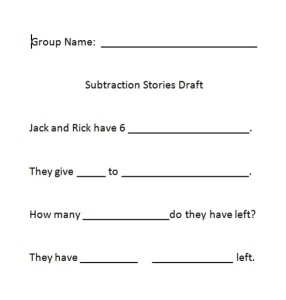 Creating the PowerPoint
Once we had the stories typed into PowerPoint we added clipart. Then I helped students animate the clipart, so that the correct number of items were “taking away”. From there I recorded the students voices. I had each student read one sentence in their story. By including the audio element, this project also supported building reading fluency.

Here is the final product. I omitted the audio in this version to protect the privacy of my students.

How could you use PowerPoint animation to help students act out story problems?

2 thoughts on “Using PowerPoint to Act Out Mathematical Story Problems”