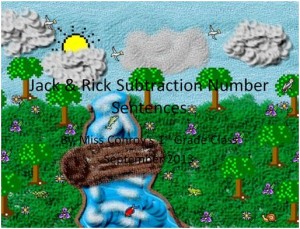 This particular week students read the story Jack and Rick. A charming story about two lovable characters, Jack, a rabbit and Rick, a bear who find themselves on opposite sides of a river. The pair have to problem solve to get on the same side of the river, so they can play together. In math students have been working on subtraction with an emphasis on story problems. For my cross-curricular project I had students work in groups to create their own taking away story problem. I thought using PowerPoint would be the perfect tool for this project, because students can deepen their understanding of subtraction by using animation to demonstrate taking away.
END_OF_DOCUMENT_TOKEN_TO_BE_REPLACED