Over the past two weeks, my mental model of inquiry-based learning has developed.  One new insight I have gained is that there different types of inquiry.  Inquiry can be teacher directed, teacher-student shared or student directed.  I also learned that these types of inquiry-based learning exist on a spectrum.  On one end of the spectrum is structured, teacher-directed inquiry and on the other end of the spectrum is student-centered, open inquiry.  In the middle of the spectrum is guided inquiry that is teacher-student shared.  We also learned that inquiry can be multidisciplinary (Topic C, 2018). END_OF_DOCUMENT_TOKEN_TO_BE_REPLACED

Background: Apps, Books and Cows… you are probably wondering what these things have in common.  It all began back in February when we had two back-to-back non-fiction texts in our Harcourt Trophies reading book, At Home Around the World and Me on the Map.  As you can probably decipher from the titles these selections had a geography focus.  My passion, as you know is utilizing educational technology, so I wanted to find a project that would incorporate technology and geography.  I always wanted to do a Flat Stanley project, so I started exploring my options.  I found there was an iPad app that was free and and Edmodo app that cost $20.00.  I figured I would try the iPad app out first to see how I liked it. END_OF_DOCUMENT_TOKEN_TO_BE_REPLACED 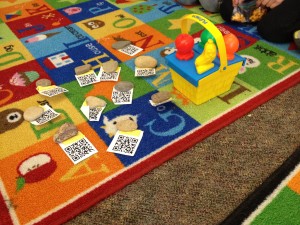 All primary teachers know that Reader’s Theater is a great way to promote fluency and expression in students’ oral reading.  Recently, we read two different pieces of literature  in class that lend themselves nicely to Reader’s Theater.  The first story, Try Your Best, is a realistic fiction story composed of mostly dialogue between characters about kids at a summer camp. The second story, Did You See Chip?, was a play about a girl who moves to the new city, looses  her dog, and makes new friends on her journey to recover her missing pup! I wanted to try incorporating technology into my students’  Reader’s Theater experiences. For these two projects I selected two different tools, Voki, a web based tool, and Puppet Pals 2, an iPad app. END_OF_DOCUMENT_TOKEN_TO_BE_REPLACED

We read a delightful story titled Space Pup, about a super hero dog who rescues a bus that is stuck in the mud. I thought it would be fun to challenge students to extend the story by creating their own Space Pup adventure. I thought I could introduce my students to story elements by having them create a comic strip. END_OF_DOCUMENT_TOKEN_TO_BE_REPLACED 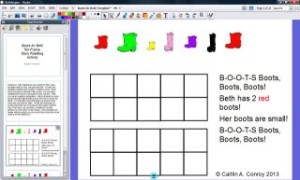 In class we read the story Boots for Beth about a pig named Beth. At the beginning of the story Beth can’t get her boots on because they are too small. Throughout the story Beth’s animal friends offer their boots, but none of them are right for Beth. At the end of the story the friends surprise Beth with a new pair boots. Our focus reading comprehension skill for the week was retelling. I knew I wanted to work this skill into the project if possible.

In math we have been working a lot with ten-frames. I thought it would be fun for students to drag boots onto the ten-frame instead of boring counters. I decided to use ActivInspire to create this presentation.

END_OF_DOCUMENT_TOKEN_TO_BE_REPLACED 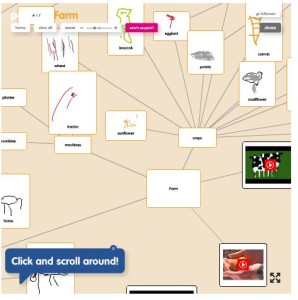 This week we read an informational text titled All That Corn in our Harcourt Trophies reading books. On Day 2 of the Harcourt Trophies plan it recommends that the teacher help students create a concept map about farms. I have been eager to use a new, web-based, mind mapping tool with my students and I saw this as the perfect opportunity. When I did my action research during my graduate studies with my PreK students, I used Kidspiration software for mind mapping. Kidspiration is a good software package, but for the purposes of this blog I want to make sure that I am showcasing applications that are free and accessible to everyone. Plus, I know there are many mind mapping tools that have come out in the past few years, so I wanted to familiarize myself with the new tools out there. The world of educational technology is ever-changing, so it is important to stay up to date!
END_OF_DOCUMENT_TOKEN_TO_BE_REPLACED 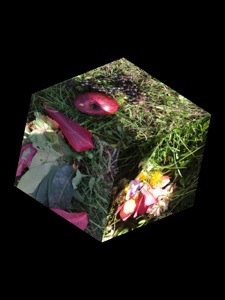 This particular week we read the story, Todd’s Box, about a boy who takes a walk with his mother. Along the way he collects artifacts from nature, and he saves them in a box. At the end of the story he surprises his mom with the box. In math we were still working on subtraction, which was the focus of our Jack and Rick Subtraction stories the previous week. Incorporating science was a logical choice based on the reading selection for the week. For this project I decided to have students go on a nature walk and take digital photos of what they found. Then students created their own virtual box to showcase the artifacts they found on their nature walk.
END_OF_DOCUMENT_TOKEN_TO_BE_REPLACED 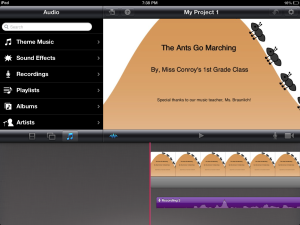 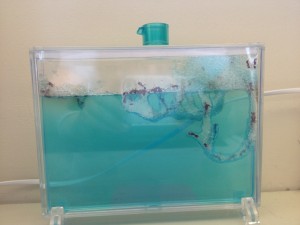 END_OF_DOCUMENT_TOKEN_TO_BE_REPLACED

This particular week students read the story Jack and Rick. A charming story about two lovable characters, Jack, a rabbit and Rick, a bear who find themselves on opposite sides of a river. The pair have to problem solve to get on the same side of the river, so they can play together. In math students have been working on subtraction with an emphasis on story problems. For my cross-curricular project I had students work in groups to create their own taking away story problem. I thought using PowerPoint would be the perfect tool for this project, because students can deepen their understanding of subtraction by using animation to demonstrate taking away.
END_OF_DOCUMENT_TOKEN_TO_BE_REPLACED