All primary teachers know that Reader’s Theater is a great way to promote fluency and expression in students’ oral reading.  Recently, we read two different pieces of literature  in class that lend themselves nicely to Reader’s Theater.  The first story, Try Your Best, is a realistic fiction story composed of mostly dialogue between characters about kids at a summer camp. The second story, Did You See Chip?, was a play about a girl who moves to the new city, looses  her dog, and makes new friends on her journey to recover her missing pup! I wanted to try incorporating technology into my students’  Reader’s Theater experiences. For these two projects I selected two different tools, Voki, a web based tool, and Puppet Pals 2, an iPad app.

Voki–  For the story, Try Your Best, I decided to try Voki with my students.  Voki allows student to create avatars.  Using these web based tool, students can select a character, background and record their voice by microphone or telephone.  You can also give the Voki a voice by typing what you want it to say.  What I love about Voki is that it has a wide selection of characters and backgrounds. One thing that did disappoint me was that they didn’t have avatars that looked like children.  You can publish your Vokis by copying the embed code, or providing  your audience with a direct link.  For the purposes of this lesson, I choose to put the Vokis into a PowerPoint, and I typed the text of the story under each Voki so the viewer could read along with what the Voki was saying.  The students enjoyed creating the avatars, but this lesson was not without frustrations!  It is very difficult to find something quiet for 1st graders to do independently while trying to record their voices!  I find whenever I try recording I end up with a lot of background noise!  My second frustration was that with Voki you can’t save a character, so for every piece of dialogue, I had to recreate the Voki including eye color, outfit, hair style, background etc.  I wish there was a way to save a character that you want to reuse again and again.  My final frustration was with PowerPoint.  For some reason when I inserted the Vokis into PowerPoint they would show up initially, but when I saved, closed and reopened they wouldn’t load.  I tried this in PowerPoint 2007and 2010 without success. I finally found success in the latest version of PowerPoint, 2013 (thanks to my wonderful boyfriend who bought me a new Lenovo ideapad for Christmas).   I’m not sure if I will be able to open it at work, however, because we have the 2010 version there.  So my plan is to make a screencast of the PowerPoint and upload  it on our school’s YouTube channel. 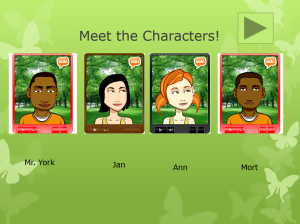 Puppet Pals 2– For Did You See Chip? I used an iPad app called Puppet Pals 2. This app is a lot of fun, and it offers 9 different locations for the setting.  Where this app falls a bit short is with the amount and variety of characters.  For example, the play we were reading included a dog, but there were no animal characters available.  (The free version also limits the amount of characters available to you.)  One neat thing you can do is use your students’ photos to create characters.  I found the interface to be user friendly.  You simply drag and drop your characters onto you background.  You can drag the characters around to make them walk, and you can move the characters limbs.  To record you hit the red record button, and press on the character’s abdomen while talking into the iPad.  (Again, I ran into issues with background noise while recording).  I recorded short clips, and then saved them.  After that I was able to combine and edit the clips in iMovie on my iPad.  The dog, Chip, only had two speaking parts, so I inserted an image of a dog, and recorded the audio directly in iMovie for this portion.  Once I completed my iMovie project I was able to upload it to our school district’s YouTube account. 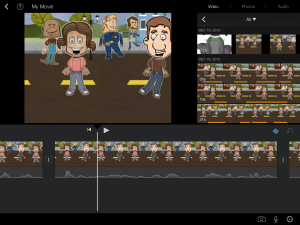 Coming Soon:  Snowman Glyphs and Acrostic Poems on the IWB